I started two jars of lichens late in February, one with Evernia prunastri (left) and one with Ramalina fastigiata – at least, I’m fairly sure that’s what it is (right).

It’s important to mention how I gathered these lichens: the Ramalina fastigiata is all windfall from a single tree that used to grow in the playground near our house. Every time I walked under it, I found at least one bit of fallen lichen, and often, I filled both pockets. But then, the other day, I walked by only to find that the tree had been cut down! Along with every other tree nearby!! I hope some city planners somewhere are hanging their heads in shame. That place is not fit for humans anymore. Or any other species for that matter.

Most of the Evernia prunastri is also windfall, but some was picked during trips to several different forest where it grows so thick that most trees are completely covered with it, and in that case, picking off small bits is OK.

Evernia prunastri, also known as oakmoss, ragged hoary lichen, and stag’s horn lichen, is a well known dye lichen, and is also a component of many perfumes (makes sense, its scent is wonderful, but that’s the case with all lichens I’ve met up close). I put 25 g of this in one jar.

Ramalina fastigiata is not specifically mentioned in the lichen chapter of “Vegetable Dyes” by Ethel M. Mairet, a remarkably useful book from 1916 that you can read for free at the Gutenberg project. Nor does “Lichen Dyes, The New Source Book” by Karen Diadick Casselman, but both books mention unspecified/other Ramalina species as sources of red/pink using the ammonia method (and Casselman also indicates that yellow can be obtained with boiling water method). I put 20 g of Ramalina fastigiata in a jar.

After adding lichen to a jar, it should be filled with 1% ammonia so it covers. I buy the ordinary kind at a supermarket. It is 8%, so I simply make a diltion to 1%.

And then comes the tedious part!

Let the lichens steep in ammonia for weeks and weeks, take the caps off every day to let in air, and shake the jars well and often to ensure aeration. Casselman warns again and again that the color will not develop properly without good aeration.

I was diligent in my vat-shaking until early April, at which point I decided to try out the dyes.

I diluted them to cover the yarn and placed them in a double boiler system with glass jars inside a pot of water. I remember reading about this somewhere, but I don’t remember who the brilliant person is…

But it’s very clever for these small dye baths AND also very good because the pH is above 10 even after dilution, so you have to heat very gently to not damage the wool: 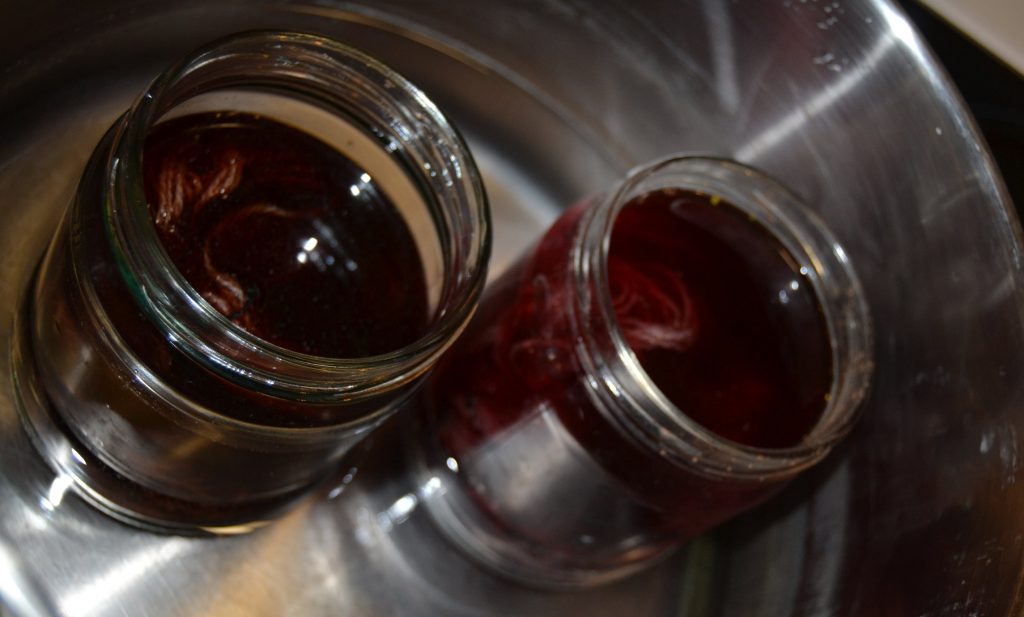 I gently heated the pot for about an hour, then took out the skeins of wool instead of leaving them in the dye bath until next day as I usually do. I did it differently because I thought the high pH over so many hours would ruin the wool.

This first dyeing attempt gave a couple of skeins of medium pink shades that are quite pleasing, I think! The Evernia-dyed skein (on top) has a slightly browner tone of pink than the Ramalina-dyed one (bottom) which is truly baby pink

After that, I let the jars continue until late June, but I’m afraid the vat-shaking was much less diligent!

But on June 21st, I decided to finish the experiment.

I filtered the rest of the liquid in each jar, then measured the pH, it was 10-11 (as expected). I split the dye liquid from each jar in two, left one of them as it was, and neutralized the other one. I used about 1 part 37% acetic acid to 5-8 parts dye. This is just what we happened to have in the house, HCl would work too. If you want to try this at home, wear goggles and lock children and pets in another room.

Then I used the same double boiler setup as first time, taking out the wool at high pH after an hour, and leaving the skeins in neutral jars until the next day. And the result: 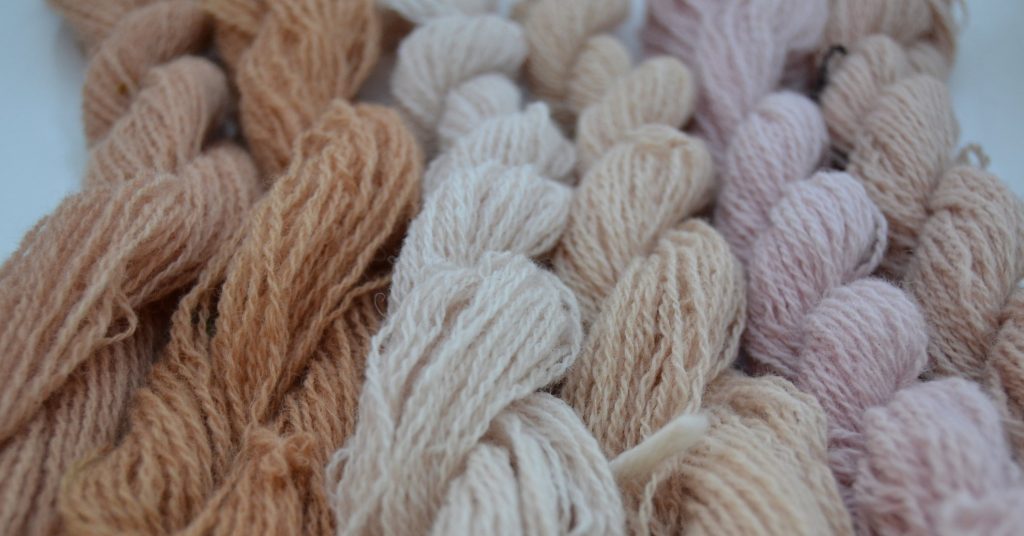 From right to left, it’s:

1: The Evernia-dyed skein from April

So actually skeins 3 and 4 are just a repeat of 1 and 2 but a couple of months later. I’m really not sure why the color was better in April than in June. Because I stopped shaking the jars as much? Or does it influence the result that I used alun mordanted skeins in April but unmordanted wool in June? It shouldn’t, since lichen dyes are substantial, but one never knows.

The neutralized dye baths yielded more color, but the color is towards tan tones rather than a real pink. Nice colors, but I’ve gotten similar colors from avocado with less effort!

Mordant 10% alun on some skeins, none on the others (it’s what I had around)

Possible improvements I’d like to get more intense color with this method, and I imagine using more lichen could do the trick. But the shaking of the jars is probably just important to optimize!

All in all, I’m pleased with my first results using these types of lichens and the ammonia method. But I do think there is a lot of room for improvement. I’ll probably start some new jars soon!

2 thoughts on “Jars of Lichens”