COCHINEAL of the CANARIES

Cocheneal is truly an amazing insect, with its huge content of red dye. Along with madder, indigo, and yellow from local plants, it allows the natural dyer to dye all the colors of the rainbow.

When the Spanish conquistadors arrived in present-day Mexico in 1519, they were on a treasure hunt – for gold and other riches. Gold, it turned out, was sparse. But the marketplaces were full of a red dye the Spanish had never seen before – cochineal (Dactylopius coccus).

In Mexico, cochineal had already been cultivated for centuries, during which it had been domesticated: the species under cultivation contains far more red dye than the wild relatives. The Aztecs did distinguish between domesticated cochineal, which they referred to as nochetzli (blood of the cactus), and wild species, referred to as xalnocheztli or ixquimiliuhqui. 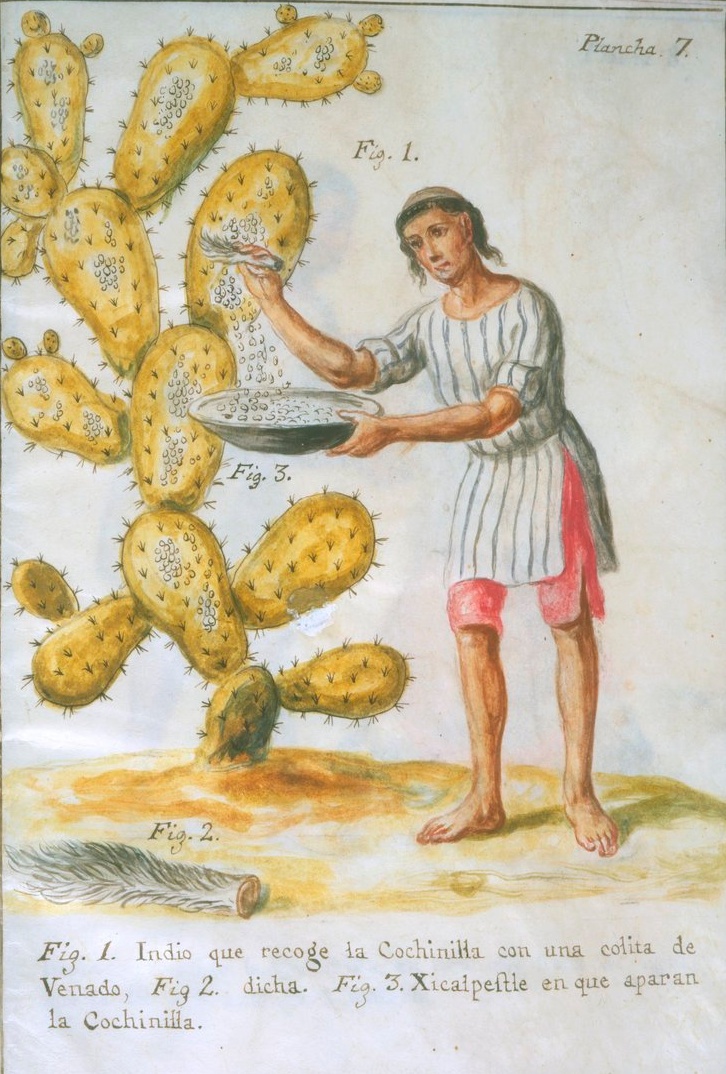 “Mexican indian collecting cochineal with a deer’s tail” Ramirez 1777. The Spanish didn’t have the patience or the skills to cultivate cochineal, so that job rested with the indigenous people.

Instead of gold, the Spanish did find silver in South America (Argentina is named after the metal), and that was to provide a steady income for the Crown. But the trade in cochineal was a solid second in terms of earnings.

At first, the conservative and secretive dyers back in Europe had been sceptic of the new “Indian kermes” (they traditionally used kermes, Polish cochineal, and Armenian red for dyeing luxury reds on silk). But as the 1540’s wore on, the conclusion was inescapable: cochineal contained a large amount of high quality red dye, many times more than the traditional red dye insects. In the span of a few decades, the use of Old World reds came to a full stop, and cochineal conquered the World.

Spain held a monopoly of the lucrative cochineal trade, and did everything possible to keep things that way. In fact, the other Europeans were not even sure what cochineal was – berry, worm, or something in between? The Bible and the ancient Greek texts didn’t offer any insights on the topic, and travel to New Spain was impossible without a permit. Of course, only Spanish people had any hope of obtaining such a permit.

Only in 1704 did a scientific study document the fact that cochineal is an insect. The study was by Leeuwenhook, who was a builder of microscopes. He used them to examine just about everything that came his way. When he took a look at cochineal, he saw insect body parts clearly, down to the proboscis (mouth part) that cochineal uses when sucking sap out of cacti.

It may be a bit surprising that the nature of cochineal could remain mysterious for almost 200 years. This photo of dry cochineal is taken with an ordinary lens, and the body segments are easily visible. But, we read out preconceived notions into any observation, and so did the learned Europeans of several centuries ago.

It would take another 100 years before Spain’s monopoly was truly broken. In 1808, Napoleon occupied a weakened Spain. He later had to give it up (and, as we all know, after a trip to Waterloo, ended his days in Saint Helen). But the Spanish colonies took advantage of the unrest and rebelled. After 1817, the point where Bolivar took leadership of the rebellion, one territory after the other gained independence from Spain. In 1821, it was Mexico’s turn.

After Mexican independence, the Spanish could no longer control the cochineal trade. Living insects spread all over the World. Guatemala became a main producer, and the Dutch managed to set up cochineal production in Java, using a type of forced labor harsh enough to kill its subjects.

Cochineal is very sensitive to the climate, and can only really be cultivated in climate that is suited for it. A heavy rain can ruin the entire crop, and the costs of cultivation were just too high in Java. With its heavy Monsoon, it’s not really suitable for cochineal production.

In the 1820’s, a small population of cochineal was sent from Spain to the Canary Islands, and it didn’t take long to figure out that the climate in these islands was close to perfect for cochineal. Cochineal’s preferred host, the prickly pear cactus, was already grown there, but for its fruits. Other than that, wine was the main crop, and the farmers were not interested in the new crop. But that all changed in 1853, the year that the fungus Uncinula necator wiped out the vines. The farmers felt a sudden urge to cultivate cochineal, and just two years later, in 1855, the annual cochineal export was 500 tonnes – a significant part of World production.

But at the exact same time, a young man named William Henry Perkin was busy studying chemistry in England. He made his breaktrough discovery of the first synthetic dye, mauveine, in 1856. By 1859, the new dye was already big business. After that, the rest is history! One synthetic dye after another is made, including synthetic versions of alizarin (the main red dye in madder) and indigo.

The production of natural dyes collapsed. Cochineal, madder, indigo, weld, all of them. From a huge production, incredibly lucrative over centuries, nothing remained. Or, almost nothing.

Natural dyes survived in tiny niches. Synthetic dyes were never fully accepted for Persian carpets, so a niche for madder remained. Cochineal cultivation continued in the Canary Islands despite very low cochineal prices, mostly because there was no real alternative. Cochineal survived as a scientific dye, for dyeing certain tissues for microscopy. But in the 1960’s and 70’s, the interest in natural dyes returned, and that same interest is here today.

Production of natural dyes has been accused of using farm land, that could otherwise be used for food production. In some cases, that is true. But in the case of cochineal, the picture is slightly different. Cochineal is cultivated on land that is not well suited for typical food crops. Furtermore, the insect has such a high dye content that synthetic carminic acid is more expensive than the natural product!

Today, the World’s largest cochineal producer is Peru. Extremely low wages allows the country to produce very cheaply, and it produces 85% of the annual World production of 1100 tonnes. The Canary Islands, on the other hand, only make up 3% of World production.

I have started buying my cochineal from Lorenzo Pérez, a third generation grower of cochineal in Gran Canaria. The product is completely traceable, and is shipped directly to me.

Lorenzo Pérez and his father, who has worked with cochineal cultivation for over 50 years, and who still works in the fields daily, use traditional cultivation methods. They simply cultivate cochineal in the way it was always done.

Cochineal cultivation is full of balancing acts that require experience. And, a lot of hard work. Of course, the cactus itself must be cultivated, typically the prickly pear cactus (Opuntia ficus-indica) – without a healthy stand of cacti, there will be no cochineal.

The cacti are inoculated using fertilized females, who are full of eggs. As Pérez shows in the picture below, inoculation is one example of the balancing act. The cacti must carry sufficient insects to give a good crop, but too many can kill the host.

When the eggs are laid, they hatch, and the nymphs use their mouth parts to attach themselves to the cactus. This is how cochineal lives, as a parasite on the cactus. The females stay in place for the rest of their lives, but the grown males have wings. They fly away, breed, and then die.

But the females remain, and in 3-4 months time, they are mature and full of fertilized eggs. This is the stage where cochineal is harvested for dyeing. It is done as it was always done – manually, by scraping the cochineal into a container. Comparing the method below with the one in the first image on this page, there is really no difference.

Again, a balancing act. The fully grown females should be harvested, but smaller ones must remain to ensure the next harvest. For every single insect harvested, a human being has to decide to harvest now or wait for later.

After harvest, the cochineal is dried. Cochineal is traditionally divided into quality categories according to drying method – from the lowest quality, killed in boiling water and then dried, the slightly better ones that were dried in an oven or on hot metal plates, to the best quality, the sun dried silvery cochineal.

Pérez sun dries his cochineal on large frames. Impurities are removed (again, manually) and the cochineal is passed though a sieve, so only large individuals, which are the ones with the higher dye content, are part of the final product.

Pérez single-handedly had an EU quality standard put in place for cochineal (something that must require some kind of super powers, knowing how things work in the EU) that means dry cochineal should contain at least 19% carminic acid. But many times, the content is even higher.

Dyeing with cochineal, you do get the feeling that you are dealing with a dye that has super powers! In order to test the Canary cochineal in my local conditions here in the far Western part of Denmark, I made a couple of test series on test skeins of wool, each weighing 11-12 g. For one test series, I used 1 g (one gram!) of cochineal, ground in the mortar, boiled in a small amount of water, then added enough water to cover the wool. Each test skein was dyed for about an hour, except the last ones, they were allowed to spend more time taking the dye.

Both test series used alum mordanted wool, and I always use rainwater for cochineal dyeing to avoid the minerals in our ground water (they weaken the color). For some reason, the first skein did not come out the darkest, the second one did. But after that, the dye intensity falls for each use of the dye bath. But the last ones are still beautifully dyed, and that is of course due to the high dye content in cochineal.

The next test series is made in the same way as the first one, except that cream of tartar was added during the first boil. That makes the colors much sharper! I don’t know if it just a pH effect, or some more chemistry is going on.

1 gram of cochineal on 11-12 gram alum mordanted test skeins of wool. Dyed in rain water, with addition of cream of tartar. In total, the one gram of cochineal dyed 91 g of wool! The first skein dyed is on the left.

Adding cream of tartar completely changes the feel of the color. Most often, I omit it, since I like the warm and dusty tones in the first series much better.

IN OUR ETSY SHOP

1 thought on “COCHINEAL of the CANARIES”